It’s been an insane few months. I started a new job at work and with the holidays and everything gaming has taken a bit of a back seat in life. I still play D&D once a week, and we’ve been running a Blades in the Dark game for a few months now.

In December we picked up a new Telescope for the family. Ostensibly for Penny’s Christmas gift, but honestly for everyone in the family.

I’ve always wanted a big fancy telescope since I was a kid. My parents had gotten an old refractor at some point, but living in the suburbs and having a telescope that was super difficult to use, I never saw anything exciting and got discouraged quicklly. With that in mind I wanted to get something large enough that it would really scratch the itch I had for awhile, and also help foster Pens excitement for astronomy and not discurage her in the same way. I did some research on telescopes, which I had done off and on for months, and came across a reddit post for buying a telescope.

This thread is perfect for getting you going and directed me at a 6” – 8” dobson. So I picked up the Orion XT6 6” Dobsonian Telescope for the family for the holidays and set it up. 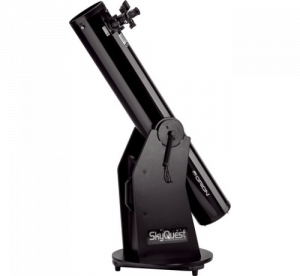 Right away we started looking at the easy and obvious things. The moon, venus, Sirius and Betelgeuse. Those were really cool and Penny was getting exciting. I wanted to see some Deep Space Objects like Nebulae and star clusters and galaxies.

We spent some time doing research on books and sky charts to help us find some of the more difficult items.

We found a few easy star clusters like the Pleadies (M45!) and practiced finding some constellations. Honestly outside of the constellation Orion I had no clue how to identify and of the others. I didnt even know Orion isnt visible at night during the summer! Maybe I only look at starts in the winter? The book lists items you can see with a telescope at home and gave us a ton of great recommendations on what to look at to start, how to find them and how easy it is to see them. It recommended we start with the Orion Nebula (M42!). It’s super easy to find and almost visible with binosculars.

The Orion Nebula was so easy to find I was shocked. It’s located in Orion’s “Sword” (aka penis) and we were able to find it in minutes. It was really breath taking to see it for the first time. I was a bit bummed however, because it didnt look like all the pictures I had seen online. This led me to doing some more research online about viewing Nebula and realized that the light is do dim that the human eye under normal conditions cannot take in enough light to see the colors you see in those fantastic pictures. Maybe some day we’ll make it to a dark sky site to see them for better.

Today Penny can find Orions Nebula on her own. The first three things she looks for each time she’s out with the telescope is :

Penny and I decided we needed to do a fun little project with our telescope. We did some research on the Nebula that we had seen and learned they are part of a list called the Messier Objects. Basically some old french dood discovered some while looking for comets and made a list of all the objects so he could keep track of all the NOT comets he had found. I figured, if some dood in the 1700s could find these with a primative telescope, we should be able to find them as well using our new fancy modern telescope. So we’ve ordered a poster that lists all the Messier objects and we’re starting a project to find them all!

M1 is also known as the Crab Nebula! It’s located in the Taurus constellation and using Taurus and Alderbaran (Alderan?) you should be able to find it! First we read the information in the book about M1 which is the remnants of a star that went supernova in 1054! Pretty cool that it was a star that went Supernova during humanity’s exisitance! Human being actually saw this star go supernova! Thats pretty fascinating when you think about how little amount of time humanity has been around on the cosmic scale.

We spent some time trying to figure out which of the damn stars up there were Alderbaran … Where was the Taurus constellation? Where is this star Tianguan thats next to the cluster?! So confusing.

Penny surprised me. She was able to find Alderbaran first and together we figured out the V shape grouping of stars it sits in. That we realized was the head of Taurus! And Tianguan is one of the tips of its horn! And the Pleiades we had found before was close by and part of the Bulls back? I guess? either way it was cool to see all these items that we’ve been able to identify all sort of close together and helping us to pinpoint what we’re lookign for!

So getting “in the area” of M1 we figured it should be pretty easy to spot! Here we are on a relatively moon less night, with clear skies, and living in a place with relatively low light pollution (we’re a Bortle level 4! Bortles!!!!)

Check out a light pollution map for more info on that or to find out what your level is.

Took us a bit but we eventually found a “smudge” on the lense that stayed in the same place when we moved the telescope. It was barely noticable, but we are confident to say we found it! M1 is checked off! We practiced finding it a few times, moving the telescope to a differnent spot in the yard, resighting on Orions Nebula, then Sirius, then Betelgeuse, then Alderbaran, then the Pleiades, and finally over to Tianguan, stepped down to Struve 742 and boom, there’s the smudge again. It was a really neat feeling to be able to walk through those steps to find the Nebula. The book Turn Left at Orion really helped walk us through those steps and made it really uncomplicated to find. I’d say easy, but it wasnt easy, but it was certainly uncomplicated.

After that we were too cold to do much more, it being in the low 20s and the wind picking up we packed up and went in for some hot cocoa. Maybe tomorrow night will be good too!