Playing board games with friends, as with all things in life to me, are really just opportunities to have fun, create stories to tell others and laugh at your own ridiculousness. Whether you are the butt of the joke or the source of the joke it is always fun to have shared experiences with others and hopefully get a smile or two out of those past experiences. Sometimes there are tears, and thats ok. As I told my daughter recently while she cried and swore she could never trust me again after I assassinated her mother in a heated game of Secret Hitler (another of my favorites we’ll post about later), we sit around the table and play board games for fun, to have a good time, to make each other laugh, and just enjoy each others company, no matter who wins or loses… but in the end there is always fun stories to share with others and laugh over. And she now laughs at the great Thanksgiving Assassination of 2017 just as I do!

With that in mind I’d like to share one of my favorite gaming stories from my 20+ years of playing board games, which involves the great and fun card game from Steve Jackson,  Munchkin. 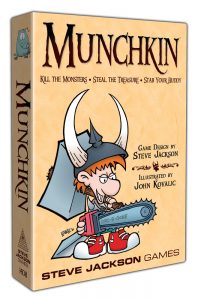 If you are not familiar with Munchkin, It’a a super fun game that focuses on trying to get the most stuff and loot for your character and involves trying to  steal shit from a dungeon and backstabing your friends. First person to advance to level 10 wins. It’s a silly game and has a lot of satire. It also plays off many old D&D and RPG tropes about min-maxing and Munchkin-ing your character (hobbits with chainsaws, etc.) which should appeal to those of us who have played D&D before. It also includes some borderline raunchy humor which is hard to explain to an 8 year old: 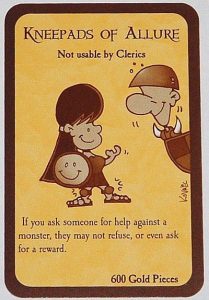 There are a ton of expansions for it, which can all be combined together, and many different thematic brandings of the game which can add new twists and flavor to the game. There is Munchkin Cthulhu, Munchkin Booty , Munchkin Zombies, Star Munchkin, Munchkin Bites!, etc, etc.

I honestly haven’t played the game the game in years, but it’s a thoroughly enjoyable game that has relatively basic rules that are quick to learn. Its a great game to introduce to kids and get help them get bitten but the table top gaming bug. Which is a nice segue into one of my favorite stories involving not just Munchkin, but gaming, young gamers, and how I’m a complete jerk.

To set the scene a little bit, we have some relatives out of state who we visit a few times a year, and they love to play tabletop games. Introducing them to new board games is something I always do enjoy and I’ve shared quite a few with them over the years. When i first started playing games with them, my wife and I were newly married, and had no kids to pester us with yet. The Virginia folks (as I’ll refer to them from here on to keep things anonymous) would typically play traditional games. Monopoly, risk, and lots and lots of card games (I refuse to play pinochle with them anymore). And some weird dice game I never quite understood.

For me generic card games just don’t do it for me. I prefer games that have a specific Thematic element to them. Kings in the corner with generic Hoyle cards? No thank you. Throw some Targaryens and Lannisters on those pieces of card stock? I’m in. I know it’s silly, but maybe its that scarring moment of playing pinochle with my father in law in Las Vegas thats to blame.

So back to the story.

It was another holiday season many many years ago, in which we journeyed to my in laws (the Virginians). I brought with me my new favorite game, Munchkin. the Virginians at the time consisted of the two adults and their 3 kids, two of which were old enough to join us in learning the game and playing. The two kids playing with us were younger and probably still school age to pre-teen ages, but both are super smart kids and picked up the game and strategy pretty easily. At the time there were some play styles that should have keyed me in that this could be an issue in the future, specifically they played it more as a Co-Op game. They were willing to help each other out with or without an exchange of loot as the game recommends. I combed through the rule book to see if there was a rule against helping someone out for fun, or with the expectation that they might return your good deed and assist you later, but alas perhaps it was just my cold dead heart that felt that wasn’t quite in the spirit of the game. 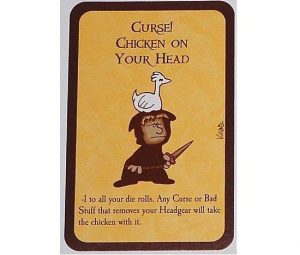 Sometime passed, and with it some of my recollection of just how much time had passed, and also with specifics around dates or even years. I soon found myself back in Virginia, with the Virginians, and around their dinner table, once again playing Munchkin. This time with their own copy of the game! Success! I’ve spread the joy of this game with more people! The kids were a little bit older, with the youngest of the kids of gaming age being a super sweet 9 year old girl who was and IS super smart (I think she’s going to MIT for engineering or something) and enjoyed gaming as much as anyone else. My wife was her Godmother and always had a soft spot for her in her life, hell both of our lives. I had first met her (we’ll call her Middle C) when she was just an infant, so I had been around this family for a long time and Uncle Danny was just part of the clan.

A few rounds into Munchkin during this winter holiday season I noticed something interesting. They would often ask for assistance in defeating a monster of the Munchkin Dungeon with the phrase “future consideration.”

For example “Aunt T, help me kill this Gazebo for future consideration”. 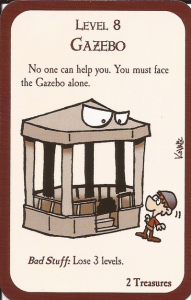 From the way they played it it translated into: “Help me and I’ll help you later! Yay! Isnt winning great! This is a fun Co-Op game where we all want to kill the dungeon denizens!”

If you’ve played Munchkin you know part of the fun is in dicking your fellow players… “friends”… over in the game.

“Oh you are fighting a Level 8 Gazebo? Nope. Now you are also fighting a Lvl 20 Cthulhu!!!” 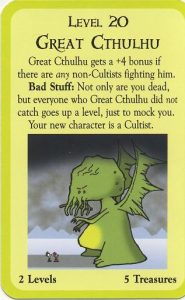 Lets take another look at the box real quick: 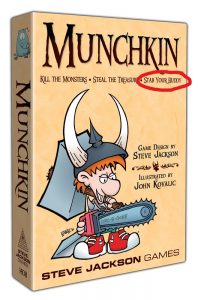 Yup, still there. “Stab your buddy.”!!! Nothing about this being a co-op game.

So i think you can all see where this is going.

We’re sitting there, it’s a nice winter day, we have a fire going, everyone is in funny (ironic) ugly holiday sweaters eating warm gingerbread cookies and drinking mulled wine or hot chocolate for the kids (I may be idealizing this a bit. I probably was drinking a Sam Adams at the time as my beer palate wasnt that refined at the time. ) and playing a rousing fun filled family oriented game of Munchkin.

I’m facing a tough fight with a Gazebo (or some shit), and my cute little super sweet 8 or 9 or 10 year old niece says to me “I’ll help you Uncle Danny! For Future Consideration!”.

“Ok Middle C!” I say in a happy tone. I’ve just raised a level, not going to die to the Gazebo, and dont need to split my loot! Win Win Win. “Thanks Middle C!” 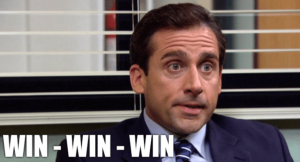 Stop now if you don’t want to read about how i crushed all the joy in a young girls heart.

Fast forward to later in the game. Middle C is winning. I told you she’s smart. In fact, she’s about to win the game. We all play the prerequisite wandering monster and monster enhancement cards (read the instructions for more on those! This isn’t a blog on HOW to play! ) In a vain ploy to halt her relentless drive to the finish line. When suddenly it looks like she dosen’t have enough bonuses to defeat the monsters arrayed before her! But she just smiles, as she has thought this through (again she’s smart) and looks to me.

“Uncle Danny. I’d like to call in my future consideration.”

I look at her. I look at the table of cards. I look at the other players. Everyone else has that resigned “awww man. she’s gonna win again” look as they realize together she and I have enough bonuses to defeat the monsters.

I just say “No. I consider helping you and decline. I believe this card says you die and lose a level.”

In hindsight i realize i was being a dick. But honestly, you play to win. Well, you play to play, but you also Play to win the game. (Thanks Herm.)

If anything you play the game to have fun stories you can share and laugh about all these years later. I think she (and her family) learned a lesson in that moment. Well 2 probably.

1: Uncle Danny is a dick when he plays game.

2: Be specific! “Future Consideration” has a loop hole! CONSIDERATION! I CONSIDERED to help her, and determined it wouldn’t be in my best interest to help her and let her win the game. After that they started using “future obligation” in their games, which i think is a much better choice of words.

Pretty sure i still lost tho.

For this one I have to go with Ruthless Rye from Sierra Nevada. It’s a nice beer that hits the right notes with the pine and rye. It’s a bit on the malty side which I’ve been turning down lately, but that tastiness from malty beers i drink lately helps to remind me that I’m alive and should suffer for my misdeeds (see the post above). It’s not too high ABV wise so while not a session beer you can still have a few before you are making kids cry. 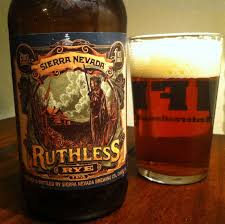 Also fits the story a bit.