It’s been about a month since the last Dan Con, so i think it’s safe to begin talking about it.

What is Dan Con you might ask?
Well, It all began when I moved to a town out in the far reaches of Western Maryland. My wife got a job at a small university after toiling on her Doctorate for a bunch of years, and in celebration we moved out into Trump country.

Working from home and living hundred miles away from your friends makes it super hard to make new friends, and while I tried to find a group of people who i liked, and in turn liked me, i may have sat at my house for way too much and counted the number of cars that turned around in front of my house for nearly 8 months. So, My friends took pity on me and offered to come out and visit for a weekend and play boardgames, drinks lots of alcohol, and watch bad movies. Thus the first Dan Con occurred in the depths of winter.

After that we realized we really enjoyed getting together and hiding in a house for 4 days and just hanging out, so we decided to do a summer version of Dan Con, which we dubbed, Burning Dan.

For funsies, i took an old pirate statue I had broken, and dubbed him “Armstrong the Pirate” and awarded him to whomever had the most “points” at the end of the weekend. It’s never been me. 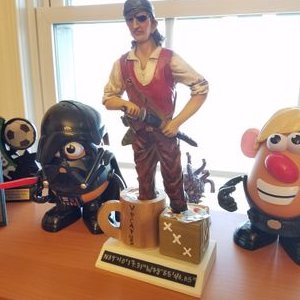 This is our pirate trophy. 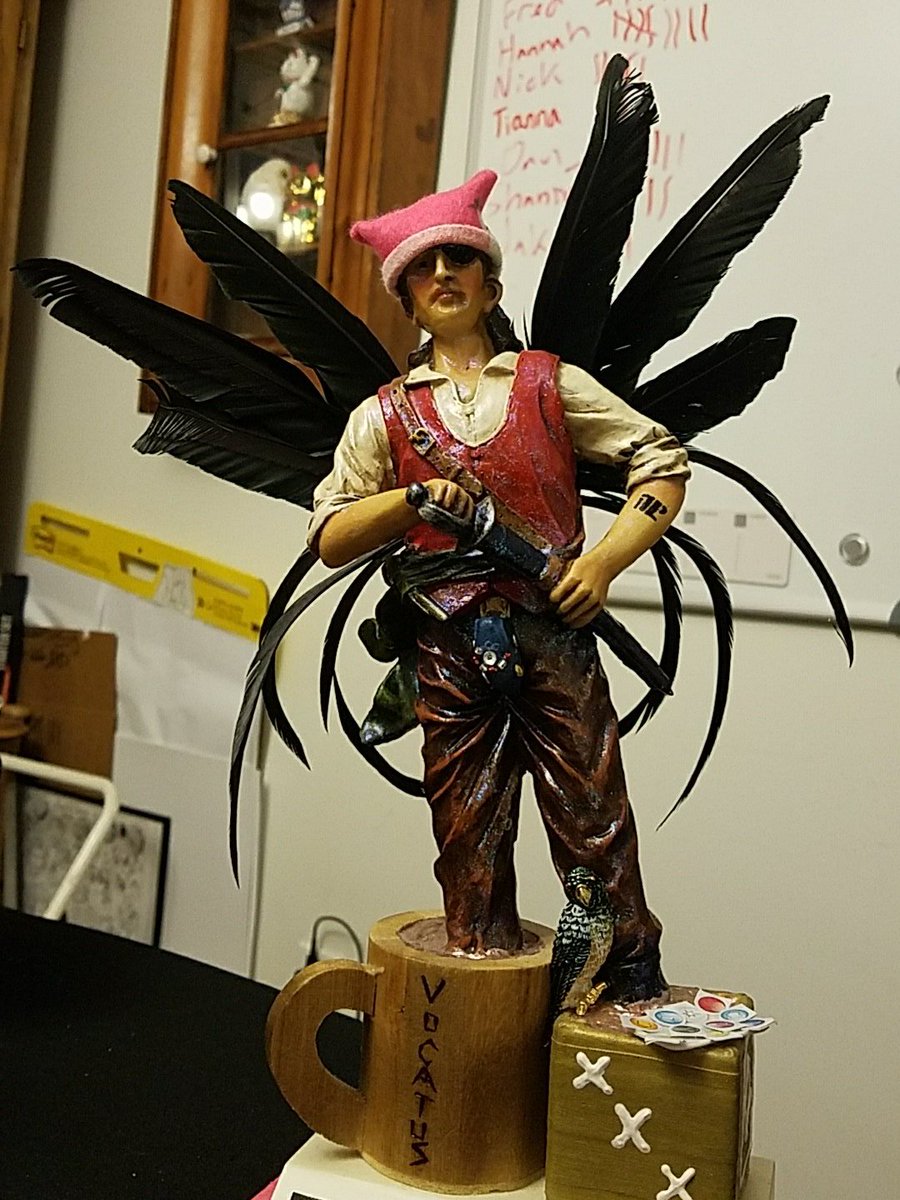 Each year something gets added on.

Our winner this year for Dan Con (that happens in the winter) was Hannah. 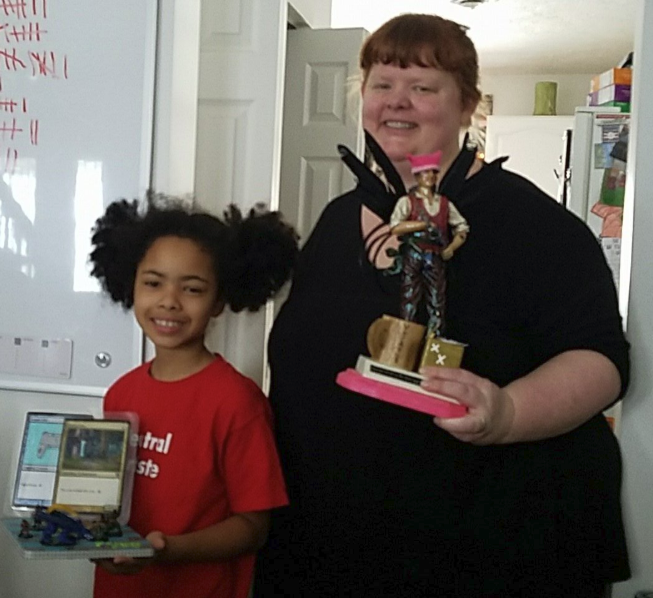 Elsa also won Penny Con. Which the points for Penny Con are even more bullshit then Dan Con… let me tell you.

This year was great because I had finished the basement remodel enough to exile the kids to it: 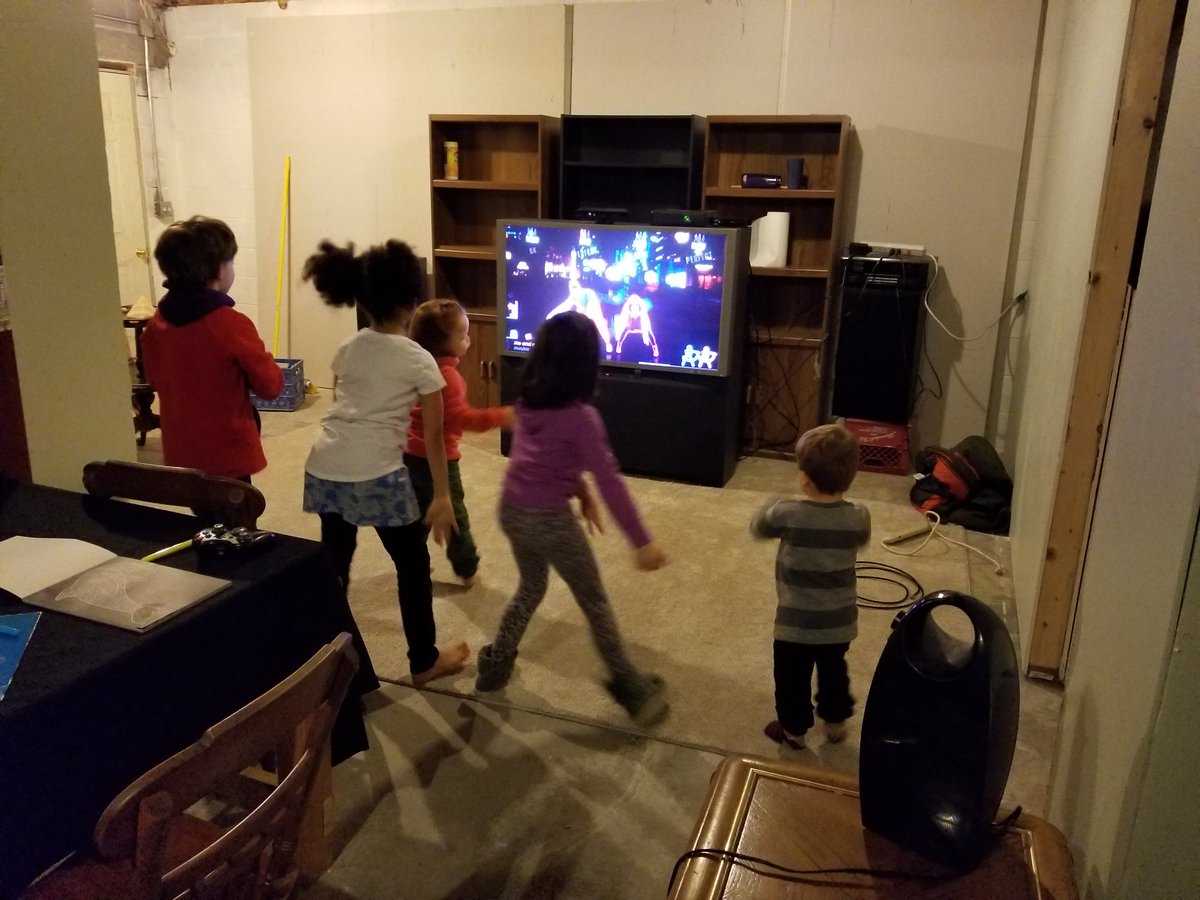 And I didnt have the flu. I also got to run some DCC and we played maybe more games then ever before.

I finally got to play Sheriff of Nottingham. Which I loved. We played some Coup (which is an all time favorite at these events), The Captain is Dead (which i LOVED LOVED LOVED) and some Disney Codenames.. which was actually kind of boring.. once you’ve played Codenames: Deep Undercover.. there’s no going back (Peter North, what what).

This years highlight had to be playing Terraforming mars. My friend James kept warning me about how complex the game is, and when you open the box and all the cards fall out on your head (this didnt happen to me) it can be a bit intimidating. But once you’ve picked all the cards up, it really is a blast. Jake dropped a comet on Fred… what more can you ask for! 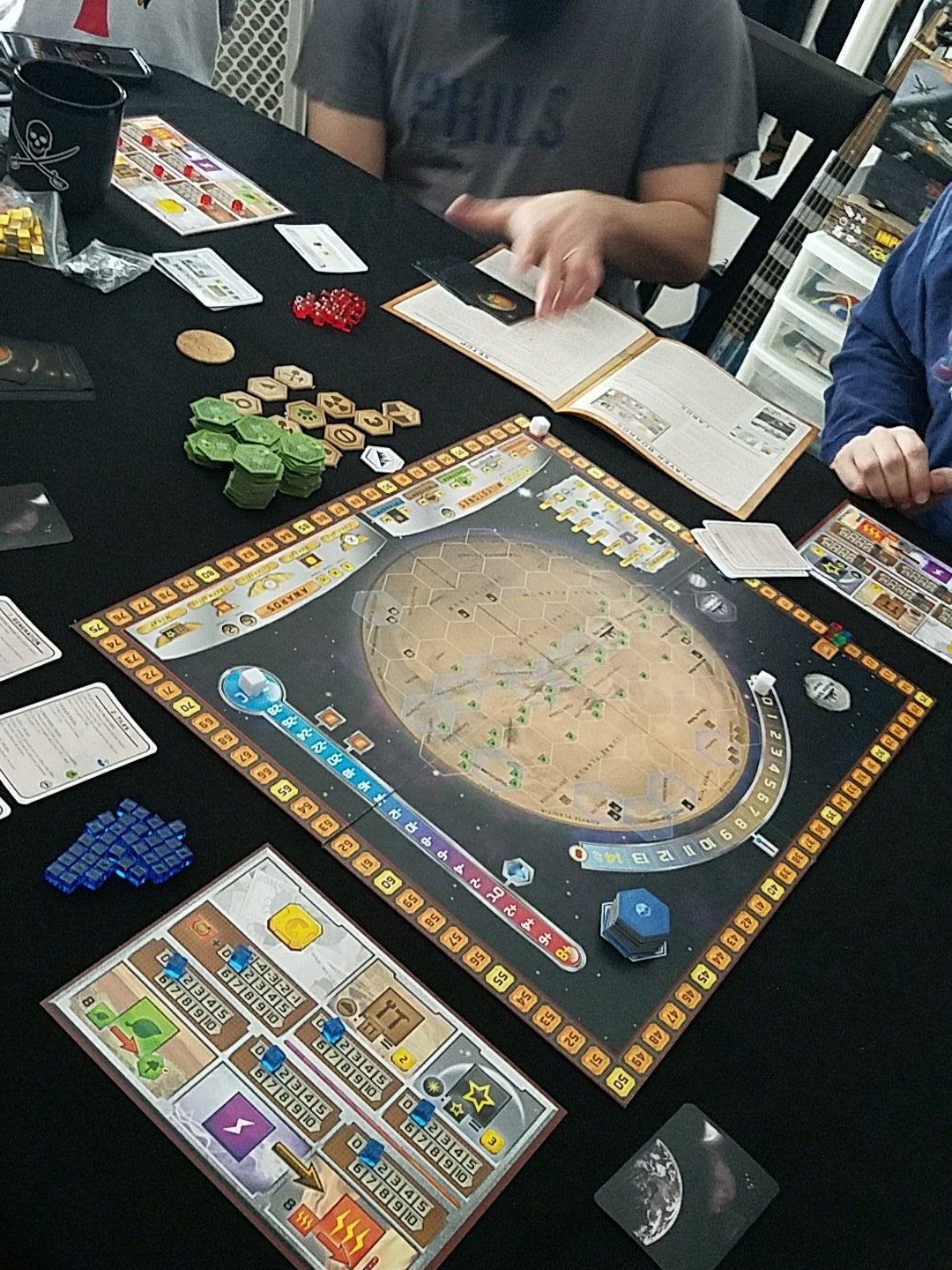 The basics of the game are building up your victory points through terraforming mars! Who’d have guess. If you want to learn how to play go watch one of the great videos on youtube. This isnt that kind of blog. I really liked that I could drink whiskey and still follow the rules for the most part. Even on the sunday morning of Dan Con, which tend to be pretty rough. Nick was pretty sore he missed out on this one, so we need to make sure we get it in again for the next tone. I also really like you use the pandemic virus cubes for your markers. Thats pretty hot.

We also played some Secret Hitler, which is probably our go to and most classic Dan Con game, mostly because we’re all a bunch of terrible people, and Fred is always Hitler. 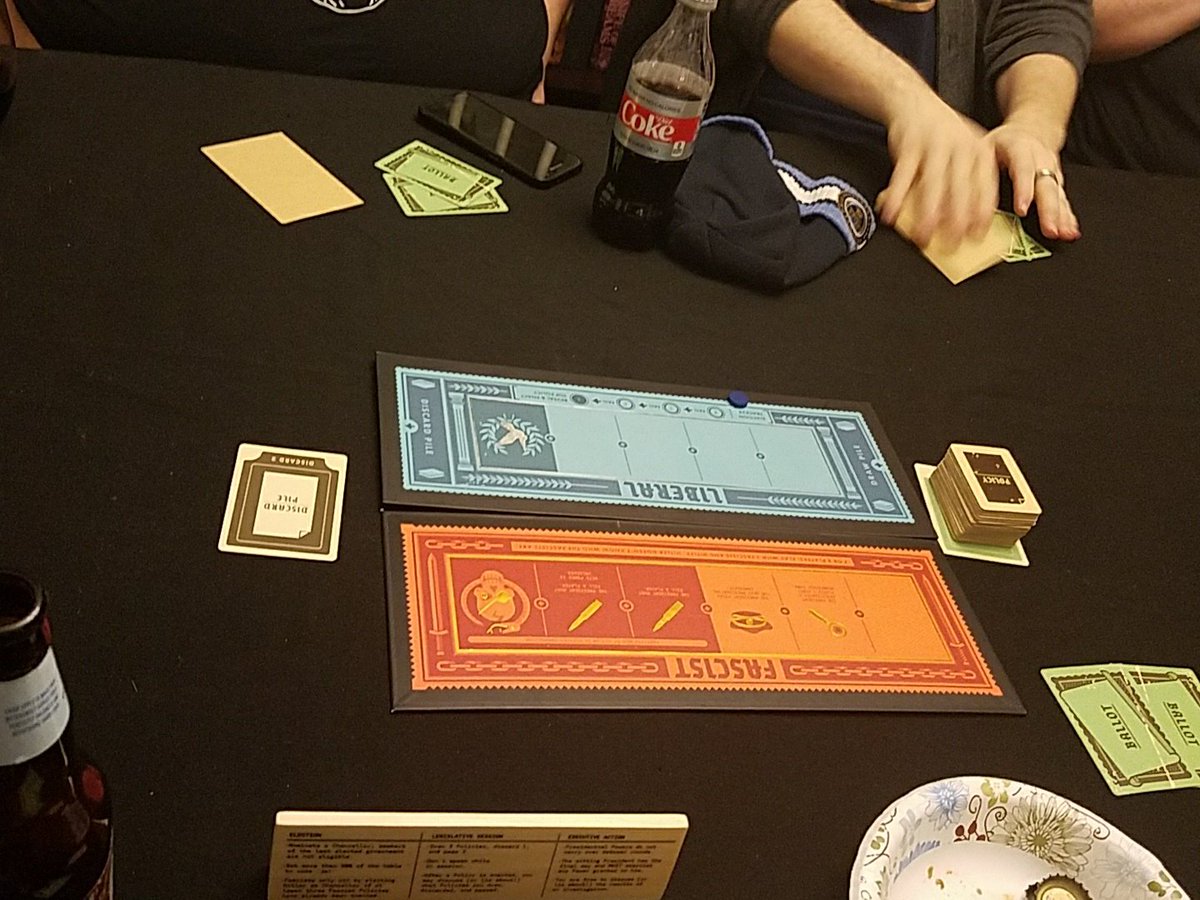 Last thing to mention is we played some of Red Scare, which is another deception based game like Secret Hitler, but a little more weird. It was fun, but weird. 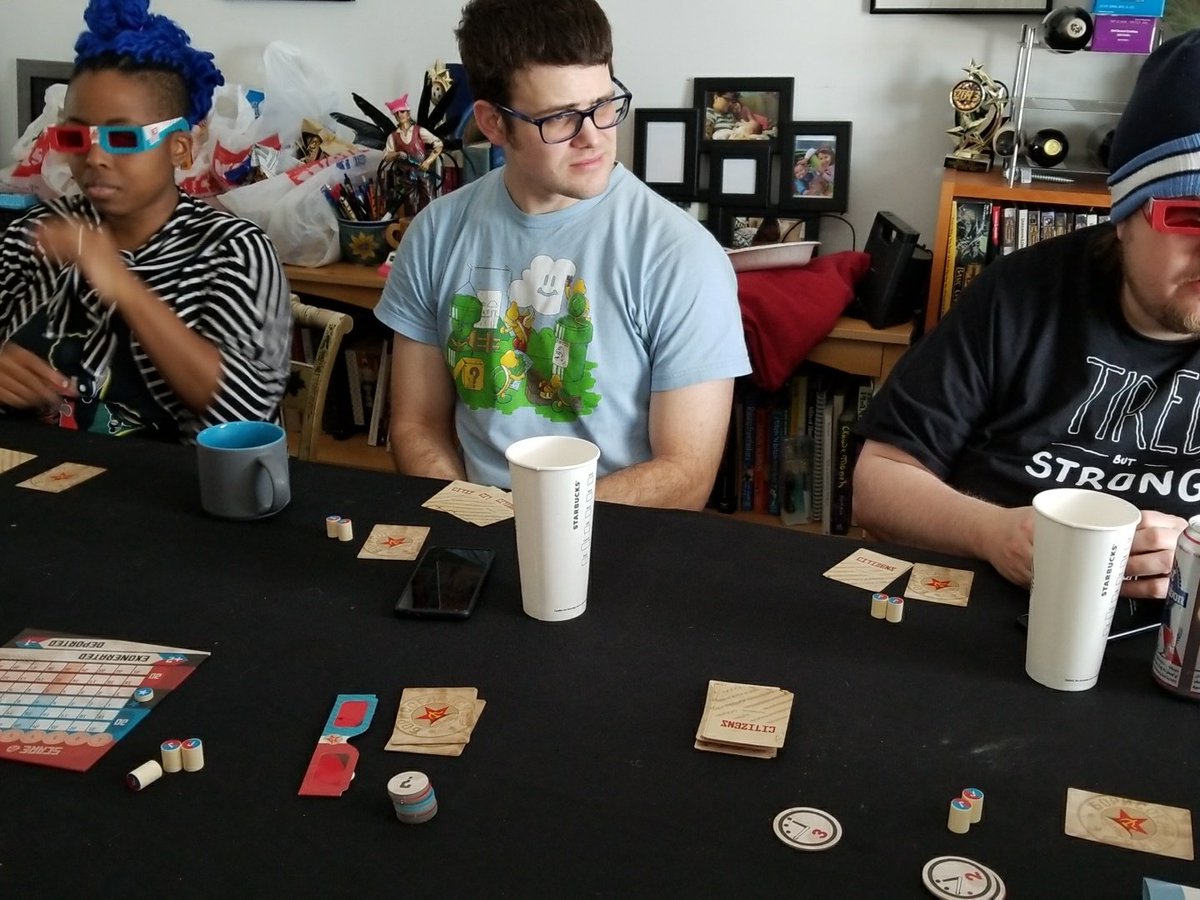 Half the players wear weird glasses. Which means they can read half of the cards on the table. the other group can see that half but cant see the OTHER half. very weird. We probably wont play it again. I wouldnt call it the low light though, because that might be the 4 hour game of Unstable Unicorns we played. 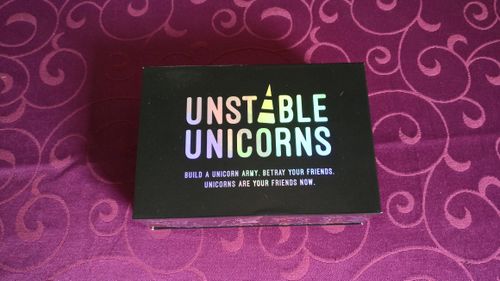 The game itself was fun itself(do you like my scale of rating for games yet?) and I enjoyed the mechanics, but it literally dragged on for hours. At these kinds of events a game is best played in 1.5 hours to 2 hours tops. After that there’s too many breaks for kids, food, bathroom, alcohol refills, or whatever. I didn’t like this game. Maybe with less cards, less people or both it’s more fun.. but I dunno. Felt like munchkin/flux/exploding kittens. the NFSW pack was fun and made it nice and raunchy… but meh on this one.

Not sure it was the lowlight, but between it and Red Scare it’s a toss up. I will try and ninja chop it from the agenda next year. 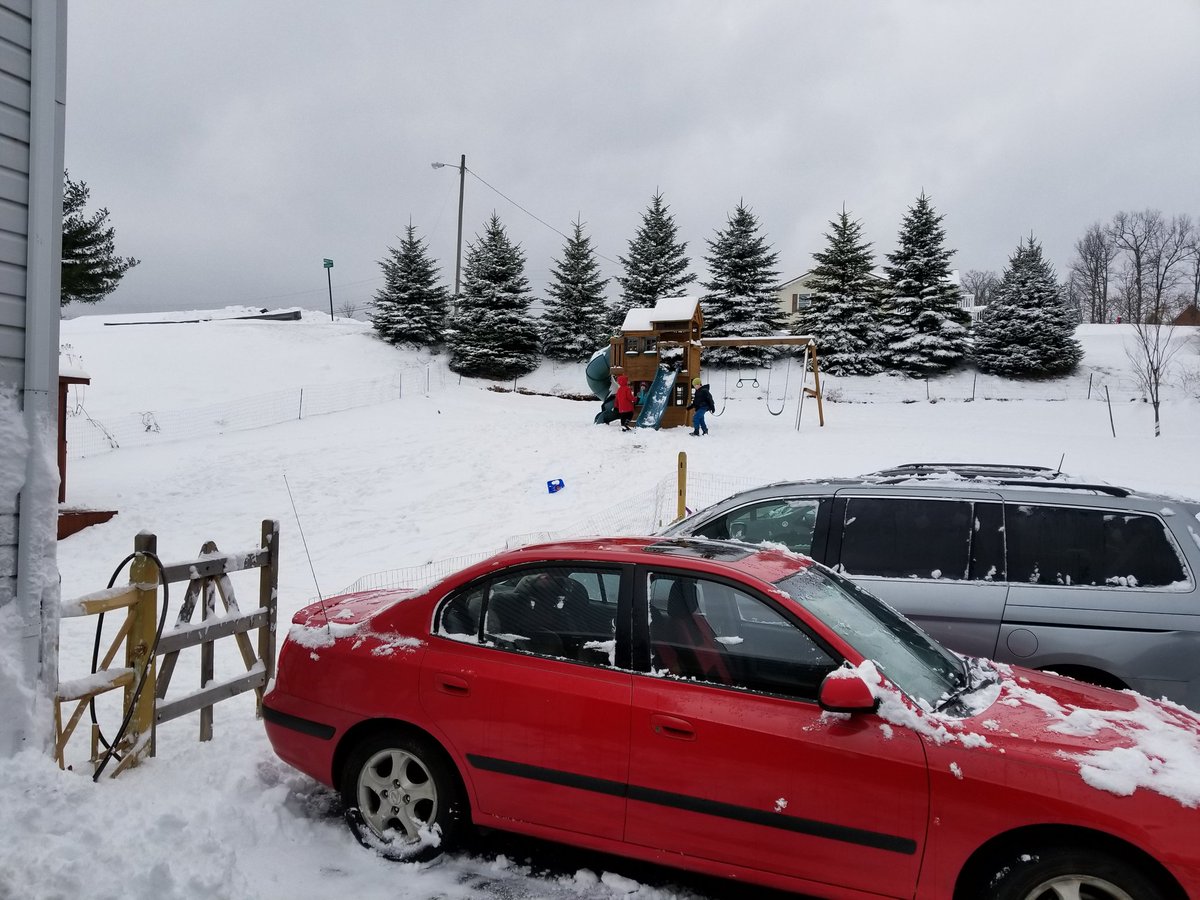 The kids liked it.